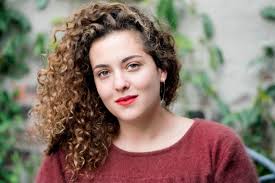 Nadja Spiegelman will read from and answer questions about her new memoir, I’m Supposed to Protect You from All This.

I’m Supposed to Protect You from All This is a fierce, angry, loving exploration of the relationships between the author, a young writer; her mother, the art editor of The New Yorker; and her grandmother, a formidable woman who lives on a houseboat in Paris. As Spiegelman endeavors to understand the most important women in her life, heated words are exchanged, secrets are revealed, and souls are bared.

Vogue called it “piercingly honest and uncommonly generous”; Booklist has called it “stunning and artistic”; Bookpage has called it “brilliant.” Leslie Jamison has written that the memoir “works like a series of Russian nesting dolls: in every mother, she finds a woman who was once a daughter… . I felt myself moved and expanded as I read this thoughtful, probing book—and I called my own mother the moment I was done.”

I’m Supposed to Protect You from All This grew out of a Writing Concentration project Nadja Spiegelman wrote in 2009, when she was a senior at Yale.