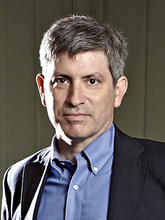 Carl Zimmer is an award-winning science columnist for the New York Times. He has won the National Academies Communication Award and is also a three-time winner of the American Association for the Advancement of Science Journalism Award. In addition, Zimmer has been awarded the Stephen Jay Gould Prize, an Online Journalism Award, and the Distinguished Service Award from the National Association of Biology Teachers.

Zimmer is also the author of 13 books about science. His latest book is She Has Her Mother’s Laugh: The Powers, Perversions, and Potential of Heredity. It was selected by the Guardian as the best science book of the year, and the New York Times Book Review named it a notable book of the year. It was a finalist for the Baillie-Gifford Prize for Nonfiction and the PEN/EO Wilson Literary Science Writing Award. His other books include At the Water’s Edge, Parasite Rex, Evolution: The Triumph of an Idea, Soul Made Flesh, and Microcosm. He has won fellowships from the John Simon Guggenheim Memorial Foundation and the Alfred P. Sloan Foundation for his books.

At Yale, Zimmer teaches “Writing about Science, Medicine, and the Environment,” an undergraduate seminar. He also teaches workshops for Yale science graduate students in science communication.

She Has Her Mother’s Laugh: The Past and Future of Heredity. Dutton 2018.

Soul Made Flesh: The Discovery of the Brain and How It Changed the World. Free Press, 2004.

Evolution: The Triumph of an Idea. HarperCollins, 2001.

Parasite Rex: Inside the Bizarre World of Nature’s Most Dangerous Creatures. Free Press, 2000.

At the Water’s Edge: Macroevolution and the Transformation of Life. Free Press, 1998.

“The Planet Has Seen Sudden Warming Before. It Wiped Out Almost Everything,” The New York Times, December 7, 2018

“Genetically Modified People Are Walking Among Us,” The New York Times, December 1, 2018

Microcosm: E. Coli and the New Science of Life

She Has Her Mother's Laugh